MIDEM, Cash from Chaos, 1977 (NNN) — The Performing Right Society and UK Music have come out strongly against YouTube and Google for not just handing them both buckets of money. 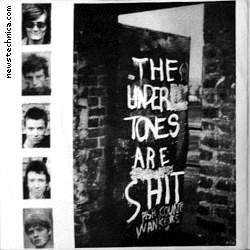 The furore started when the PRS demanded that YouTube pay them more money or remove their members’ videos, and YouTube removed their members’ videos. “It is clear they are too powerful,” said Feargal Sharkey, whose bank account died before he got old, “because they were actually able to just tell us to bog off. I am sick and tired of bogus outsiders who spout unworkable utopian visions. Instead, they should give us money because we want it. Just like the record companies used to … er, hold on, I’ll start again.”

“Our main focus is on compensating the artist,” said Howie Singer from Warner Music. “In theory, I mean, not out of our own pockets or anything. It’s amazing what you can make recoupable. As such, it’s vital that Google and the ISPs give the artists all the money that can be dragged out of them, plus a perfectly reasonable 87% for us. The six, er, five, er, four majors actually having to write a cheque would be an unsustainable imposition.”

The PRS noted its work on increasing the total revenue pool for songwriters by demanding stables pay to play music to horses, people in cars pay if they wind down their windows with the stereo on, and people singing in the shower pay if anyone else in the house could theoretically hear them. They will also be removing 6.75% of buskers’ earnings from their guitar cases and 6.75% of children’s lunch money in case they sing songs on the way to school, which the busker or child can then apply to get back minus a reasonable handling fee.