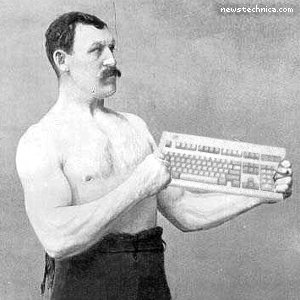 Javascript For Heterosexuals, created by incoming CEO Brendan Eich, is a static, rigidly typed, prototype-based language with first-class functions, and second-class ones.

Javascript For Heterosexuals will be restricted to users in committed heterosexual relationships with at least four children, to make sure they really mean it and aren’t just claiming the “heterosexual” label as some sort of “lifestyle” choice reverse-discrimination benefits scam.

Some intolerant insufficiently-heterosexual people have objected to this use restriction. Fortunately, Hacker News posters promptly brought people’s attention to what a huge social problem heterophobia is, and labeled these people the Nazis they are. “God created ‘GET’ and ‘POST’, not ‘GET’ and ‘STEVE’!”

“Just because I have worked for insufficiently-heterosexual people not to have basic rights does not mean I think they don’t deserve basic rights,” Eich posted today. “If my views are implemented, insufficiently-heterosexual people will be treated as less than fully human — but this in no way means that my past behavior predicts my future behavior. Or that my subordinates or company partners should worry about this. I’d like people to try to understand me better.”

“We assure you that all the insufficiently-heterosexual employees at Mozilla firmly support Brendan,” the company said in a posting today, “or at least the ones who felt comfortable to speak up. Equating a company with its CEO is ridiculous. It’s not like the CEO is everyone’s boss with tremendous control over every employee’s future and the company’s future public actions.” The company followed up with a post reassuring the community that it wouldn’t actively try to break Californian employment laws.

“I have no concerns whatsoever about Javascript For Heterosexuals,” said an insufficiently-heterosexual Mozilla employee who declined to be named for this story. “There are times when you need to set aside the disagreement and commit to working together in service of the shared goal, and anyway Wikimedia doesn’t pay nearly as well.”

Other commenters have asked that you leave Brendan alone. “The great thing about creating Javascript is that whatever other terrible things you do in your life seem trivial by comparison.”