MENTAX, Underground, Tuesday (NTN) — US military officials have condemned the latest war document release by Wikileaks as “potentially fatal to our credibility” and leading to 15,000 more officials spending time with their families than previously thought. 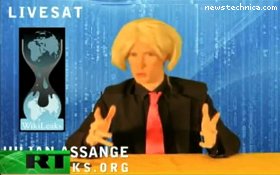 “The faltering forces of hacker infidels,” said the Pentagon’s Minister of Information, Mohammed Saeed al-Sahaf, “cannot just enter an army and lay besiege to them! They are the ones who will find themselves under siege! There are only two Wikileaks tanks in the city!”

General George Casey has denied that the United States “turned a blind eye” to prisoner abuse. “Our policy all along has been to use our military might to encourage the already peace-loving Iraqi security forces to be agents of cosmic love and beauty. Whenever a prisoner was treated with crystals and aromatherapy in a more robust manner than would be acceptable to our dolphin brethren, we were sure to report it up both the Iraqi chain of command and the one that means anything. Then we sat down together and did serious thinking about how we could be more excellent to one another. Toke, dude?”

The festering scoundrel Julian Assange was lambasted last night on CNN for his reprehensible personal life and clearly unbalanced and unAmerican mental state, which are much more newsworthy than the release of more accurate documentation than any war has ever had in history.

“I remain opposed to the war in Iraq,” said President Barack Obama, “and so too to documentation of the so-called war. We harshly condemn the release of information on this terrible alleged event. We will bring the document leakers to military justice and teach them to love again.”

In the UK, Nick Clegg suggested someone might want to possibly look into this matter a little bit, assuming it was all right with Dave of course.