WELL I NEVER, Wake Me Up Before I Stop Stop, Wednesday (NTN) — University of Metro researchers say that women can have 104 hairstyles in a single reading of a paper on the morning bus or train. 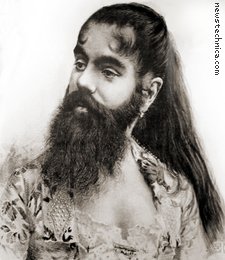 The report was commissioned, unsurprisingly, by a hairdresser. “My feeling is that women are changing their looks little and often rather than dramatic changes,” said the fatuous braying fuckwit in question. “For example, you can say ‘Jennifer Aniston’ and they will almost all recoil in horror, before admitting they had dragged their boyfriends to Sex and the City 2 just to piss them off. I mean, it’s obvious they can’t possibly get a good boyfriend or a decent job without their pubes sculpted and coloured to perfection.”

But the change is not always for the better, with almost three quarters of women admitting they regretted having gotten up that morning rather than having had an attack of anarchistic revolutionary feminism, cutting their boyfriend’s dick off and setting the world on fire. Although by lunchtime they would have called into work saying they’d be in the next day, having a certain predilection for chocolates and Sky TV that needed funding. “It’s so hard to find someone who really understands calf hair braiding,” said one ball-busting womyn. “‘Natural’ colour? Wot’s that, then?”