KINGDOM OF HECK ON EARTH, Dibley, Monday (NTN) — The General Synod of the Church of England has ruled that women may technically be regarded as a variety of human, leading to international outrage and threats of a schism. 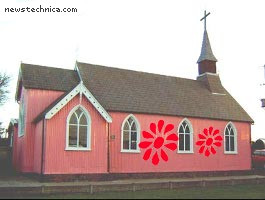 Women will be considered eligible to be elected to humanity, though traditionalist Anglican priests will be allowed to maintain their claimed Biblical right to assume mental incompetence of all females and speak to them only via a man.

The decision has left much division in its wake, with many traditionalists referring to the Apostle Paul’s clear statements regarding the regulation number of penises required before being considered a member of Homo sapiens.

“Some traditionalists left the synod chamber in tears,” said The Reverend Prebendary David Houlding. “In tears! Not that we’re leaving. We can be much more spiteful pains in the arse by sticking around. But the scope for making other people’s lives a misery in the Church of England is getting narrower and narrower and the options are rapidly closing. We had to treat sodomites as humans, now women. What next? Papists?”

The Catholic Church had offered a happy refuge for those who loathed and despised homosexuals, females and other lesser creatures, though Anglican priests who had considered the offer were not in general really all that interested in raping children.