BACK IN THE BLACK, Camden High Street, Thursday (N! News) — Celebrity gossip star Amy Winehouse will diversify her career to something to do with music, she told incredulous reporters today. 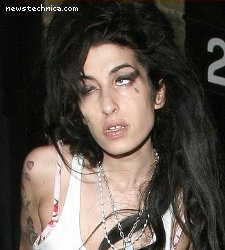 “I’ve always felt a musical urge,” she said today, “humming tunes to myself as I snorted the streets of Camden clean. It’s gunna have these ‘songs’ on it, right. We’ll put on about a record’s worth. Yeah. I’m gunna make these noises, right, with my mouth, over the top of the music. I know, it sounds weird, but it could be really good! Prob’ly!”

Miss Winehouse is famed as the “go-to” celebrity for the paparazzo down on his quota, having worked extensively with the finest terrible tattooists and plastic surgeons to make her image instantly recognisable.

“In fact, I actually made a record several years ago,” she claimed to laughter from the assembled journalists. “I wouldn’t expect people to remember back that far, of course.”

Professor Richard Dawkins spoke out against “pop music charlatanry.” “These people expect to take our money for the most transparent of lies, such as Amy Winehouse having anything whatsoever to do with music. If you have evidence that Amy Winehouse has anything to do with music, why not show it and be hailed as the new Einstein? Of course, we know you cannot — because you are a fraud.

“Still, I’ll credit them for not trying to claim Cheryl Cole had anything to do with music. That would simply be ridiculous.”