’LATE, Brizzle, Thursday (NTN) — A Relate counsellor’s sacking for refusing to counsel gay couples has been upheld, leading to Church of England members rioting and setting alight Relate offices across the country. 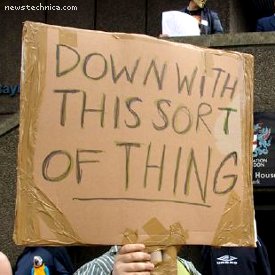 Gary McFarlane was sacked by Relate after it had refused to accommodate his sincere and deeply-held Christian beliefs that the Sodomite unbelievers should be stoned to death to burn in Hellfire for all eternity.

“Because of my Christian beliefs and principles,” said Mr McFarlane, “there should be allowances whereby individuals like me can actually avoid having to contradict their very strongly-held moral stance that these people should be set on fucking fire. Requiring us to treat Sodomites as human is as ridiculous as this ’round Earth’ theory.”

Former Archbishop of Canterbury Lord Carey had earlier called for judges with a “proven sensitivity and understanding of religious issues” to hear the case, threatening “civil unrest” and “rivers of blood” over recent court decisions involving Christians having to behave in a halfway civilised manner in the workplace. “Comparing someone who wants to have all homosexuals horsewhipped with a ‘bigot’ is tantamount to genocide,” he said before leading a pitchfork-and-teacup-wielding mob to Relate Avon, with signs saying “BEHEAD ANYONE WHO SLANDERS CHRISTIANITY” and “GOSH DARN THAT FREE SPEECH.”

The riots have led to questions in Parliament on Christian immigration and a Jan Moir column in the Daily Mail on the dangers of the asylum process letting “these violent God-botherers” into Britain.

“This is all terribly upsetting,” said Abu Hamza al-Masri on Thought For The Day this evening. “Can’t we all just, you know, get along and be nice to each other? It’s worth a try!”