THE MEMORY HOLE, Soho, Wednesday (Ponk News) — Controversial Conservative PPC Philippa Stroud has emphasised her belief in equality for the demons inside gay people. “Those demons are natural Tories and the backbone of our party.” 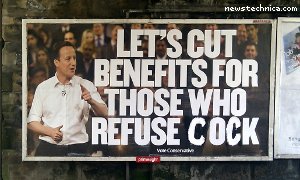 “In our Big Society™,” said David Cameron, “the rights of hellish unholy ghouls will be respected just as if they’re not ghastly abominations out to suck your soul out, destroy your mind with eldritch horror and sell you double-glazing and loan repayment insurance.”

Mrs Stroud pointed to her religious writings on the subject. “It is vital to a fair electoral system that there be votes not only for people, but for their most horrifying nightmares. We pray the demons out of these hom-o-sexuals, so that they may attend their nearest polling station tomorrow and cast their crucifix for the party of hopes, dreams and ambitions. The demons’, anyway.”

Mr Cameron will be staying up for thirty-six hours straight working up to and through the election. “I’ll sustain myself on the souls of unbaptised infants. Perfectly safe and legal, at least since the deregulation in the eighties.” Technicians will be on hand at all times in case of wiring failure or software glitches.

“We’re particularly hoping to get the tortured shade of Stephen Milligan back into the cabinet,” said Mrs Stroud. “Just don’t mention the tangerines.”

Phillippa Stroud will be working for the coming Tory government as a 100% sure-fire cure for heterosexuality.