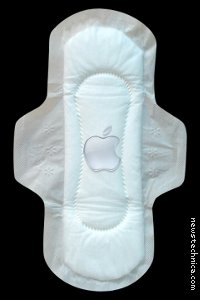 The iPad has a 9.7in full-colour touchpad and wings. According to the box, you can watch movies, surf the internet, listen to music, view photos, read electronic books and go horseback riding, swimming, cycling, mountain-climbing and roller-skating. It also comes with iWork, which lets you do interesting and productive things at the office in between screaming at everyone for being such annoying and thoughtless idiots.

Apple has also launched an app store for the iPad which will allow users to purchase chocolate, whisky and heavy objects for when some fucker crosses you, dares look at you funny or is the sort of clueless arsehole who thinks the explanation of how pissed off you are at his behaviour is always PMT. Look, even if it might be, that’s not the point.

For those who find pads too bulky, a special fluffy version of the iPod Shuffle is available, on a string.

Microsoft, who have attempted to sell increasingly bulky folded bath towels for the past decade, were not available for comment. Linux users and the Free Software Foundation started petitions advocating mooncups, but no-one paid them any attention.

“In conclusion,” said Mr Jobs, “please, please don’t kill me, darling. I love you more than anyone, honestly. Uhm … flowers?”

One thought on “Apple launches iPad for that time of iMonth”