KEEP CALM, And Carry On Panicking, Friday (NTN) — The Home Office has raised the terrorist threat level to “really strong tea.” An attack is not expected, but the government just “felt like it.” 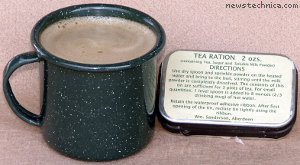 The Joint Terrorism Analysis Centre (Jtac), a unit within MI5, had advised raising the threat level based on a broad range of factors, including losing the Section 44 case, the news cycle, how stroppy the human rights advocates were getting these days and whether Cameron had put his foot in it lately.

“It’s Monday,” mumbled Home Secretary Alan Johnson. “it’s a new year. There’s a pile of shit in front of you. Your head is pounding. There’s no imminent threats, but you just know that incompetent fuckwit in Detroit will make matters worse. Tea will help. Really it will. Boyfriend dumped you? Tea. You’ve got cancer? Tea. Terrorists blowing up London Underground? Tea, damn it.”

He urged public vigilance to continue. “Look out for the usual signs of trouble. People photographing landmarks or policemen. Particularly if the photographer’s brown, that’s a sure sign. People Twittering stupid stuff. People Twittering. People. Oh God, my head. Never get involved in a land war in Asda.”

Mr Johnson squeezed the bridge of his nose for a moment. “Just be glad we didn’t raise the level to ‘gin.'”