WHAT HO BLUD, Ldn, Tuesday (N! News) — Lily Allen has renounced Facebook, Twitter, pontificating or considering herself as having anything to say worth hearing in a bid to gain “a life.” 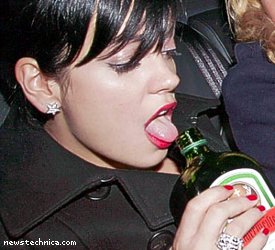 Once one of the music world’s most prolific shite-babblers and patron saint of the nightsoil cart industry, the 24-year old mockney mock-rapper bravely declared her conversion to becoming a “neo-Clueite.”

• Limit earbashing to only once a day.
• When earbashing, limit time spent to five minutes or less. Set a timer.
• If your victims start making loud yawning noises, banging their heads against the table or attempting to garotte themselves with a phone charger cord, consider reducing the time limit.
• Reward yourself (e.g. with a gobstopper) when you stick to the allocated time limit.
• Punish yourself if you run over the limits — perhaps invite the victims of your earbashing to punch the living crap out of you like they really want to.

“I just had this revelation that talking unmitigated bollocks about anything I didn’t understand, that being everything, was becoming a total addiction, when the entire world and its dog started actually explaining to me how I was a fuckwit in point-by-point detail when I was being a fuckwit. I was so addicted I was even copy-and-pasting other fuckwits’ fuckwittery. So I put my BlackBerry, my laptop and my idiot opinions in a box and gaffer tape over my mouth,” she signed.

The singer also vowed to take two years off music, despite popular opinion she had spent the previous five years off music. She explained that the bollocks she had spewed previously about filesharing had only been at the behest of Peter Mandelson, who thought it would make a good excuse.

She added that she is happier with her body image, so even if she won’t talk she’ll still be slipping nipples like an exhibitionist possessed. “I’ve suffered a lot over my body image. Now it’s your turn. An exhibitionist pain in the arse has to have some outlet. LOOK! TITS!”

OH FUCK NOT HEALTH, Whitehall, Monday (NTNHS) — Chief Medical Officer Sir Liam Donaldson has called for a “presumed consent” organ donation system, where anyone violating any NHS guideline is presumed ready to be rendered down for bits.

Over eight thousand people are on the NHS waiting list. “Resolving the organ system and declaring the consumption of alcohol a capital crime, as well as a morrrtal sin, are my two main goals before I resign in May.”

Sir Liam said the majority of people do not have a “prissiness” about donating organs. “Many have expressed to me their enthusiastic support and made helpful suggestions.” Popular public proposals for acts of express consent include:

SOHO SQUARE, Hammersmith, Sunday (Columbia) — Following one of the biggest battles in the history of the UK Singles Chart, Sony BMG have beaten Sony BMG to achieve the UK’s official Christmas number one. 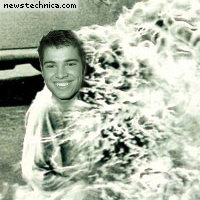 Artists signed to the label have taken the festive top spot for four years in a row. A Facebook campaign backing the record company aimed to stop another song on the label reaching the Christmas number one spot once again.

Sony BMG-signed guitarist Tom Morello said the campaign had “tapped into the silent majority of the people in the UK who are tired of being spoon-fed one schmaltzy ballad after another” and who can now buy a vastly superior download of insubstantial computerised bits and bytes from the same company. “They’re taking a stand against mindless music by buying it like they were told to.”

He said their victory looked back to such great Sony BMG artists as the Clash, as opposed to those EMI sellouts the Sex Pistols. “It’s like when Bill Clinton got to the White House and they played Fleetwood Mac. It said ‘We’ve made it.’ Man. The young people of today must be so excited!”

Meanwhile, free downloads continued to increase in line with Moore’s Law and the growth of live music as opposed to canned. Sony BMG’s victory remained news for almost three hours before this week’s inexplicable second-string celebrity heart attack took over Twitter and everyone proclaimed how they’d always loved whoever it was. Simon Cowell has tipped Finland’s Lordi as hot prospects for next year’s X-Factor. Next year’s Facebook campaign will be to get this year’s Joe McElderry single to number one.

RAGE AGAINST THE DIFFERENCE ENGINE, Goldacre, Friday (NTN) — The government has adopted a “zero tolerance” approach to science in the UK, in the hope of purging the country of it completely before they lose the next election. 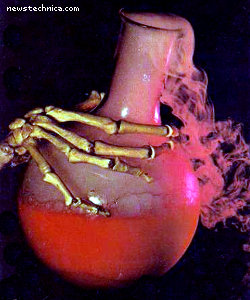 “These ‘scientists’ cause nothing but trouble,” said home secretary Alan Johnson, “inventing nuclear Bletchleys, leaking wikis all over poor Peter and claiming in public that we should use their ‘evidence’ to make decisions without considering policy even in passing, let alone front and centre. I think it’s clear they are not merely misguided, but actually treasonous.”

Particular targets include all physics and astronomy research. “People looking to the skies will only aspire to some sort of better world outside our wonderful country,” said Gordon Brown. “These people just despise Britain and everything we stand for.”

Lord Drayson, the minister for technology and innovation, struggled to come up with something nice to say about the Science and Technology Facilities Council, eventually noting that they dressed well and showed up to most meetings on time, when not unduly confused by doors marked “PULL” that refused to push open properly.

After a series of lawsuits brought in front of Justice David Eady, science and technology will be replaced with homeopathic physics and chiropractic medicine, to be made mandatory on the NHS and regulated by the Daily Mail. Arithmetic will also be checked for ideological correctness before being applied to the ballot papers.

British scientists and engineers were unanimous in their response to the move. “We’re all learning Chinese,” said recent astronomy Ph.D. Mike Peel.