THE PINK LINE, Scunthorpe, Monday (NNN) — Generally objectionable, odious and unpleasant people are going so far as medical intervention to turn them into absolute cunts, says a report in the British Journal of Obstetrical and Gynaecological Metaphors. 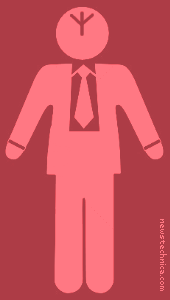 “There is a shocking lack of information on the risks of the procedure,” say researchers at University College London . “Reasonably pleasant and well-presented school leavers are turning into real estate agents and bad science journalists. They pay far too much attention to their presentation at the expense of actual depths. Some prefer the phrase ‘designer vagina,’ ’cos it rhymes and all, but we must objectively and scientifically describe them accurately: a pack of complete and utter cunts.”

Operations to remove the ability to perceive one’s own objectionable behaviour are on the rise. A sort of loud, braying sneer is a common option. Many also make the cunt as shallow as possible. “Their personality presents a sort of genital surface and nothing at all behind it except a shit-laden rectum.” Many subjects are motivated by career opportunities, often spurred on by managers who have this particular talent naturally. “Geniuses of cunt, some of them.”

But surgeons said the report overplayed the risks of an established procedure. “As a plastic surgeon, I have often considered having the operation myself,” said Douglas George of the British Association of Aesthetic and Plastic Surgeons (BOOBIES) as he jiggled his DD implants toward the camera. “But it proved unnecessary in my case. By the way, we’re doing a great deal on internal plastic surgery. Save yourself the hideous embarrassment of a less than perfectly presented X-ray! Get a promotion at work!”

Risks to society include designer cunts admiring each other’s cuntishness and reproducing, having a child whose genes make them actually reasonably normal and decent people brought up by a pair of real cunts.

The worst cases are when some “utter and total cunt” talks his quite nice girlfriend into getting a designer labioplasty, just to try to make her feel insecure about a part of her body that no-one in the world except the two of them ever sees. Spurious media reports claiming labioplasties are on the rise are a common and vector for this sort of cuntishness. “You have to really be a completely and utterly cuntish cunt to be such a cunt about cunts. ’Cos cunts are excellent, but cunts aren’t.”

One thought on “New warning on “perfect vaginas””