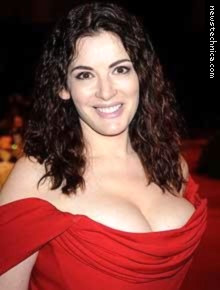 Researchers from the University of Metro, writing in Evolution and Human Behaviour Illustrated, have spent many, many hours studying 16,000 women and girls, and their boobs, in quite close detail to investigate anecdotal reports that men’s attention is often attracted by women with sizable mammaries. Moreover, the more spectacular the norks in question, the greater the propensity for passing men to walk into a lamp post in a comical manner.

The more voluptuous women were also found to be more intelligent on average, performing better on cognitive tests, although the male researchers were reduced to drooling idiocy and largely not all that interested really. “We don’t want to compromise our scientific objectivity by seeing if the subjects are capable of speech,” said one researcher with his hands firmly jammed into his pockets.

The story was illustrated with a picture of Nigella Lawson, who has a degree in mediæval and modern languages from Oxford, a really quite splendid pair and a propensity for leaning over on telly.

The researchers speculated this was to do with fatty acids found on the hips, such as Omega-3. Or possibly something to do with our caveman ancestors, as these sort of stories tend to be. But pretty much no-one read that far.

Further studies are likely to prove that water is wet, the sky is blue and that men, particularly researchers and science journalists, think with their cocks. In the meantime, here’s a helpful, educational and newsworthy illustrative photograph of Nigella Lawson’s fabulous rack.