TIN ARM ALLEY, Public NME, Friday (N! News) — After telling the others to fuck off several years ago, Robbie Williams has, after a string of epic failures, come grovelling back to Take That in the hope of enough income to pay for his, er, mineral water. 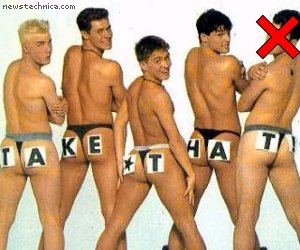 “Williams? I vaguely recall the name,” said Gary Barlow, leader of the band. “First name’s ‘Cunt,’ right? ‘Fuckhead’? ‘Shitstick’? Something like that.”

After the band’s reformation in 2005, Barlow successfully matured the former boy band’s sound and achieved two hit albums. “I understand there’s some twatrag who wants to rejoin Take That,” he spat. “I was inclined to courier him a turd in a box, but someone offered to back several dumptrucks filled with gold bullion up to our houses if we let the dogfucker on the same stage as us. He’ll have to start at the bottom, of course, but I’m sure there’s lots we can do to make him feel as welcome as he deserves.”

Williams discussed the reunion on Jonathan Ross this evening. “Gary’s just joshing. We’re getting on great — even when we weren’t speaking, he was keeping in touch, sending me press clippings of every Take That reunion chart position and sold-out arena show. I was even along on Mark Owen’s stag night. I’d thought it was traditional to tie the groom to a lamp post with a bucket on his head, his pants off and his cock painted bright red, but I took it in good spirits. Love the guys. Love ’em.”

A reunion tour may take place next year. “I’ve got Robbie’s rider sorted out,” said Barlow. “Ours is a suitable selection of wines, spirits and juices and I’ve got to check the portaloo outlet for his. Can’t wait to work with him again.”