ARGLETON, Lancashire, Saturday (NNN) — A Google Maps error has created a phantom city: “Perth” in Western Australia, in what is in fact a completely empty space. 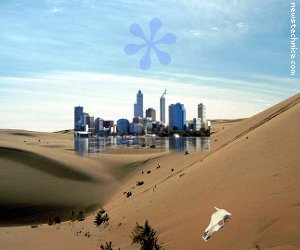 The mystery has locals so intrigued that a few have made the journey to the enigmatic spot. “I started to weave this amazing fantasy about the place,” said one intrepid local explorer, “an alternative universe, a Narnia-like world. I was really fascinated by the appearance of a non-existent place that the Internet had the power to make real and give a semi-existence.

“Of course, it’s inconceivable that an empty space on the map like that could have a city in it. Imagine what it’d be like living there. It’d be pleasant enough, but imagine growing up there, thousands of miles from civilisation. You’d go mad. It’d be like a J. G. Ballard story. The only people who could enjoy it would be deranged millionaires. Nice to retire to, though. I bet the drivers wouldn’t be able to tell left from right.”

Still, though “Perth” appears to be a town without residents, streets, coordinates or even a history, it has taken on a life of its own online. People put it as their place of residence on Facebook or Twitter. Others claim to come from there, always adding that they’re never going back. There are even films about the “vibrant” Perth indie music scene.

Google said in a statement today: “Google Maps data comes from a variety of data sources. While the vast majority of this information is correct there are occasional errors. Thankfully they’re quite obvious like this one. Why would anyone put a city there, of all places? Someone’s obviously having a lend of us.”