GEFFEN, Westminster, Wednesday (NNN) — Lord Mandelson has today announced that the outgoing Labour government will be going ahead with the “three strikes” plan against Internet filesharing, thus ensuring the widespread use of encryption in all routine network communications. 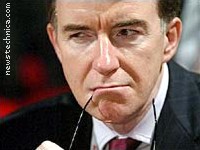 “Encrypted communications as standard is the best possible thing for everyone’s privacy,” he said today, “but there’s so much inertia from the installed base of unencrypted systems. This will provide a rapid incentive for everyone to upgrade as soon as possible. In our last few months in power at the fag-end of a failed government, we need to leave a real legacy for the future.”

MI5 and the police have objected to the plan due to the difficulty of mass-monitoring encrypted systems, even with the RIPA power to obtain passwords, since mass anonymity systems such as TOR and Freenet have been constructed where the end-user never has nor sees the encryption key. “But a few hideous terrorist atrocities is a small price to pay for less Lily Allen songs being shared. Particularly if they happen on the Tories’ watch. MuWAAAhahahaha. By the way, have you noticed just how much Dave Cameron looks like Iggle Piggle? Uncanny.”