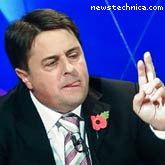 Prof Paabo will shortly publish his analysis of the entire Neanderthal genome, using DNA retrieved from fossils. He aims to compare it with the genomes of modern humans, chimpanzees and neo-Nazis to work out where it all went horribly wrong.

“What I’m really interested in is, did they have children back then? And did these children go on to form the English Aborigine population of 17,000 years ago? And did their pamphlets make any more sense back then, and when did they introduce a football game to their regular Saturday bloodbaths?”

Such an answer might ease the controversy over recent contradictory discoveries. Some specimens seem to have both modern human and Neanderthal features, some even managing to string words into apparent sentences on Question Time. Some cave paintings of the time appear to be condemnations of “mud people,” particularly smart and beautiful ones who patronise them in public appearances.

“I used to believe Neanderthals were primitive,” said Professor Chris Stringer of the Natural History Museum, “but in the last ten to fifteen thousand years before they died out, around thirty thousand years ago, they were leaving behind complicated bead designs that appear from other cave paintings to translate, as far as we can work out, to ‘Fuck off you brain-dead fascist wanker.'”