YESLER WAY, Seattle, Monday (NNGadget) — Microsoft Windows has once again trounced all comers in security, with a recent survey showing 59% of all Windows machines on the Internet being infected with malware and under the control of botnets. Malware rose 15% just from August to September this year. 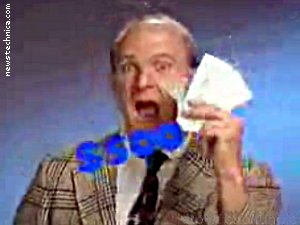 Windows users continued to be stupidly complacent Typhoid Marys, telling Mac and Linux users that they were every bit as susceptible to viruses and Trojans, despite the Windows:Mac:Linux virus proportions in the wild continuing at approximately 100%:0%:0% for the fifteenth year in a row, and pumping out gigabytes of spam and denial-of-service attacks from their thoroughly 0wn3d computing cesspits.

“The truth is out,” said Steve Ballmer, taing care not to wash his hands when preparing the food for his Windows 7 House Party. “Mac and Linux users are just too pussy for viruses. Gotta keep your immune system up! What are you, some sort of faggot? Too artsy or nerdy for MANLY food?”

The time on the digital clock behind him changed at random as he foamed slightly at the mouth. “Windows — we’re NUMBER ONE! And here you were saying Windows was a load of ‘number two.'”