TWO HUNDRED METRES, Turn Left, Thursday (NNN) — Minicab saviour TomTom has announced their latest navigation device, the Stop, targeting motorists on a budget. The price is subsidised by donations from the motoring public in honour of the 150th anniversary of the publication of Charles Darwin’s Origin of Species. 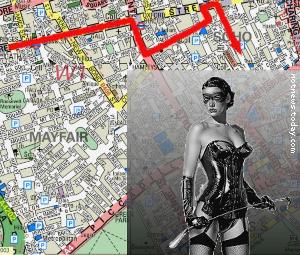 The user interface has been greatly simplified, with just an on-off switch and a microphone. No installation is required, the user merely beating the gadget into place on his (usually his) dashboard with his forehead.

In operation, the user shouts his planned destination at the Stop and the device determines its mode of operation according to the precision of the destination, the estimated intelligence of the user and the number of casual ethnic slurs and appropriately applies the latest database of railroad tracks, Ministry of Defence firing ranges and cliffs before announcing“Mon aeroglisseur est plein d’anguilles” and shutting down.

The Stop will be available free to white van men, real estate agents, students whose parents have just bought them their first car and Chelsea mothers in Range Rovers. It will be made mandatory for Daily Mail readers.