WEB 1.99 RC 1, Cyberspice, Thursday (NNGadget) — Only 98% of Twitter updates are “pointless babble,” says a new report that studied 2,000 tweets over a period of two weeks. 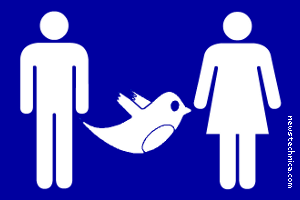 Almost 2% was Stephen Fry, Neil Gaiman or retweets thereof. Most of the rest was Warren Ellis posting scatological abuse of his fans.

Twitter’s demographics as of June 2009 were 55% female, 43% ages 18 to 34, 78% white, and 99.5% of such short attention spans that Facebook might as well be War and Peace. Botnet readership was considered likely to rise as soon nothing with organic intelligence would be able to cope.

Twitter recently redesigned its homepage, changing the tag “What are you doing now?” to “Post tomorrow’s CNN headlines, particularly about #goatse.”