THE INDIFFERENCE ENGINE, Steampunk Britain, Sunday (NNN) — Seven million Britons face having their internet connection cut off and fines of up to £50,000 as Digital Britain is implemented. 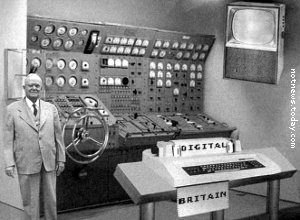 Lord Carter, the report’s author, has now left the Government for consultancies unknown. Lord Mandelson, who has taken over responsibility for digital policy, has been persuaded of the need for a tougher approach after entreaties from starving music mogul David Geffen, who was introduced to him by the Rothschild family. “He warned me in 2001 that these ‘MP3 players’ would lead to the downfall of civilisation. I understand iPods were popular in the City just before the Great Recession, you know.”

Internet piracy is estimated by the movie and music industries to cost them around £1.4 million billion squillion a year, ripped untimely from their generous artist-supporting pockets.

Critics have compared the proposals to King Canute, failing to turn back the tide. “So it’s up to the Government to supply the sandbags. We have an industry to defend!”

Ofcom, the broadcasting regulator, will require Internet providers to record users downloading illegal content. The magical copyright detector, which the music industry just knows the ISPs are being obstructive in not enabling immediately, will be used to send a massive voltage up through serious repeat offenders’ Internet connections and into their chairs.

Labour backbencher Tom Watson said the sanctions would attach an “unbearable burden” on an emerging technology with the power to transform society. “Sounds just fine to me,” said Lord Mandelson.

Kerry McCarthy, Labour MP for Bristol East, will be in charge of the party’s Internet campaigning ahead of the general election. “Voters will increasingly be searching the web to find out what we think about the issues. If we haven’t cut them off.”

In other news, membership of the Pirate Party UK, launched earlier in the week, has been increasing at 100 new members per hour.

One thought on “Mandelson fights back Internet pirate hordes”