RATCHED, Massachusetts, Tuesday (NNN) — President Barack Obama has asked Americans not to believe “rumors” that his health reform initiatives will lead to a government-run health care system, push Medicare recipients to die rather than run up their bill or lead to widespread euthanasia of the Republican “base.” 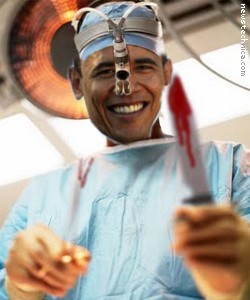 “Let me start by dispelling the outlandish rumors that reform will promote euthanasia, or cut Medicaid, or bring about a government takeover,” said Mr Obama. “That’s simply not true. Furthermore, our proposed tests would still rule Sarah Palin as being human and actually alive, despite the evidence from the brain machines.”

Sarah Palin has spoken in horror of the centralised “death boards” she says Obama wishes to introduce, instead of the ones that individual hospitals run now to send people home to die when their money runs out. “Scientists like Stephen Hawking would have been killed off by the National Health Service,” she said, “if they’d grown up in Eng-er-land!”

Peter Ferrara from Fox News refused to buy Mr Obama’s claims. “The Obama health plan is based on evidence — but evidence leads to science, and science leads to Darwinian evolution being applied to you and yours! He’ll raise health costs, make freedom of choice illegal, ration health care and build a machine feeding illegal aliens in luxury on the corpses of aborted Republican babies, sacrificed in a gay Muslim Kenyan ceremony. You can buy my book on it at heartland.org for just $19.99. Call now! Operators standing by!”