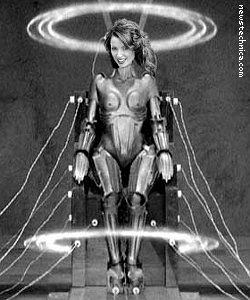 Her decision comes after public criticism for her alleged lack of facial expression on the X Factor, hence insufficient visible disgust with Simon Cowell.

Ms Minogue revealed in an interview that she is now ready for a more natural look. “Thor os so moch prossure on womon,” she told Aging Bimbo magazine. “Off you con bo hoppy woth yoursolf, thot’s tho morn thong.”

Her facial muscles will be operated using wires hooked to the same mains connection that powers the rest of her body. “Tho orms, tho logs, tho loght-op solocone brosts woth MP3 ployor. Ot’s oll good.”