THE MEMORY HOLE, London EC1, Monday (NNN) — Barclays and HSBC have passionately defended the City’s culture of bonuses barely a year after the government bailout of the financial system. 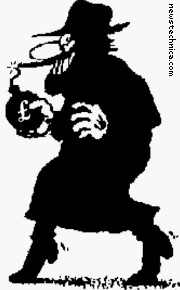 “I am shocked, shocked — oh, my cheque? Thank you! — that such bonuses have had to be paid again,” said John Varley, chief executive of Barclays. “Naughty, naughty traders! What can you expect, they’re like kids, they are. They’re like Premier League footballers or Hollywood rock stars or something else that sounds cooler than ‘rapacious scum.’ And we just have to be Roman Abramovich to compete. There are other oligarchs to impress, you know! I mean, there’s a financial system to keep pumping. Capital flowing efficiently to where it’s most needed, or will grow fastest anyway. We’re the arteries of the free market and the traders are the aneurysms. I’m sorry, I’ll start that again.”

A jump in profits for both banks led to speculation as to huge pay deals, with details to be published on Wikileaks later in the week. Barclays Capital has profits of half the British Isles, while HSBC has options on half of Hong Kong.

But criticism of the banks came from across the political spectrum. Vince Cable, the Liberal Democrat Treasury spokesman, said the Financial Services Authority needed to show “real teeth” rather than the false ones that worked so well from 1997 until 2008. Minister for Women and Equality Harriet Harman said they needed more women in the boardrooms of major banks. Shadow chancellor George Osborne replied that Mrs Thatcher was getting on a bit, but did so well last time that they were sure she’d still do a better job than the current government.

Stuart Gulliver of HSBC explained: “If a trader makes a deal, they know two days later how much they made. If it’s a five million profit, that is something we can count, we can see it, it’s real. If it turns out a couple of years later to be a hugely leveraged disaster requiring trillions in government bailouts to avert the total collapse of the world economy, how were they to know? It’s most unfair and disrespectful of artistic genius. We’re putting the 2008 crash in for this year’s Turner Prize.”