GROUND ZERO, The Rapture, any day now, you’ll see (WND exclusive) — For centuries, Christians have wondered about the identity of a future leader who will do Satan’s bidding to thwart the plans of Jesus Christ and introduce socialised medicine shortly before His prophesied return to Earth. That leader has come to be known as “the antichrist.” 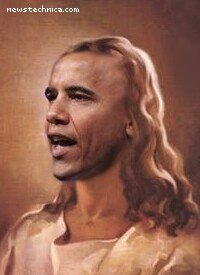 Now, advanced analysis of Luke 10:18 — “I beheld Satan as lightning fall from heaven” — shows that the Greek word for “lightning” is “astrape,” the Hebrew word for which is “Baraq;” and the Hebrew for “height,” as in “heaven,” is “Bamah.”

The financial bailout, started as a holy work by George W. Bush, demonstrates the Kenyan citizen Obama’s Satanic intentions in having the temerity to continue it, evangelising the worship of Mammon in the sinful financial alleys of New York.

Further research has shown that Obama’s health policies go directly against the word of Leviticus, in their subsidy for gay marriage, divorce, mixed fibers and shellfish. Leviticus chapter 1 also specifies how God likes His barbecue done in important detail.

Finally, the Wikipedia article on Obama has had vital information on the real circumstances of his birth removed repeatedly by the cabal of leftist Satan-worshipping administrators, despite the efforts of several users (User:JoeKovacs, User:KovacsJoe, User:JKovacs and User:JKWND in particular) to preserve it. The word “wiki” comes from the pagan word for “quick,” while “pedia” means “sex with children.”

Indeed, the Internet is the source of some of the most horrifyingly Satanic material in existence, proselytising the One-World government of the Antichrist forming around the Democrat Party. We must fight this every day, without fail. We must battle for the destruction of the world Net, daily … I’m sorry, I’ll start again.