DOWN HERE AT THE CENTER OF EVERYTHING, Desu Desu Desu, Monday (NNGadget) — AT&T, the largest phone company in the US and a major Internet provider, has issued an apology for having to unblock 4chan after accidentally blocking it Sunday night. 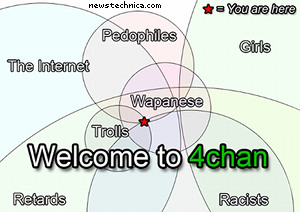 AT&T said that its customers were affected by a DoS (denial of stomach) attack appearing to come from the image-board site. 4chan users reacted in outrage, thinking the block was actually for network security reasons. “It’s a matter of pride. If we cannot make you hurl in 35 seconds we lose,” said one user, ‘Anonymous.’ “DISREGARD THAT I SUCK COCKS,” he added when questioned further.

4chan is the World’s Most Work-Unsafe Website. The browser cache of 4chan regulars (a.k.a. “mudkipz”) is enough to send ten normal Internet users to Guantanamo Bay. If you look at 4chan from your work computer, your monitor explodes, smoke comes out of your PC and your Ethernet cable melts. Then Networks come over to your desk and beat the fucking crap out of you personally. Remember: your boss is still trying to work out how he can look at girlie pictures in Excel. Don’t disturb his business labors.

For a site reviled by all, 4chan appeared to have a remarkable number of readers, as AT&T discovered after the resignation of 95% of overnight customer service staff. “I can’t tell you how pleased I am to find out just how popular 4chan is with our customers,” said AT&T CEO Randall Stephenson at his last press conference before leaving to take up his new job swimming through cesspools to orally pleasure random hobos, which he said would make him feel “cleaner” than continuing to supply 4chan to people. “It’s high time we gave up on this ‘communication’ thing altogether and went back to grunting in caves. Bad idea. Awful idea.”