MRSA MEMORIAL, Staffordshire Hospital, Thursday (NNN) — There were an estimated 100,000 new cases of swine flu in Britain last week, the Health Protection Agency said today, after 55,000 new cases in the previous week. At this rate, every person in Britain will be infected by November. 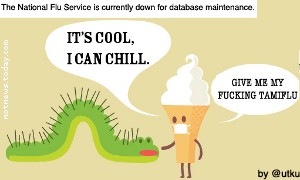 Although considered a “mild” flu, with sufferers only experiencing a week of fever, puking and shitting, the new H1N1 variant is remarkably infectious, appearing able to spread across telephone lines and through lists of swine flu symptoms on Internet news sites.

“We have not as yet managed to link a lack of swine flu to poverty, deficient character and loose morals,” said Chief Medical Officer Sir Liam Donaldson, “but that is, after all, the cause of every other problem facing the NHS: patients.”

The World Health Organisation has proclaimed that swine flu will become “a new and vital part of the human genome.” To this end the National Flu Service has set up a website to make sure everyone gets their due ration of the disease. Built by a PFI consortium headed by EDS Capita Goatse, the site crashed within five minutes of launch this morning and should be up again within twelve months.

This morning, like every morning, Robert Neville woke to fight back the infected. The genetic recombinant H1N1 virus had infected almost everyone in the world. Of the survivors, almost all had permanently succumbed to the primary symptom: bacon. A genetic need for bacon. All the bacon you could want. Forever.