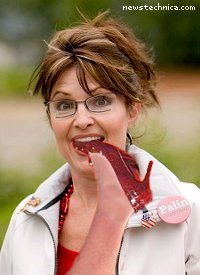 “Let me explain it with basketball. It’s the national full-court press picking away right now. A good point guard drives through a full court press like a mav’rick, protecting the ball, keeping her eye on the basket. Then the winged monkeys descend, in gay married pairs, flinging poop at me an’ reciting the Koran in French. And I shoot them outa the sky — bang, bang, pow! Quitters stick it out, but winners quit! For victory!”

The governor put her famous financial prudence at the core of the decision. “I can’t let your money and time go to waste just so I can hold the title of governor. That I’ll get ten times the cash on the fundie lecture circuit doesn’t affect my decision at all.”

Mrs Palin firmly omitted crediting by any mention the ridiculous allegations of corruption in the construction of the Wasilla Stadium and coincidental observations that the family’s house was built at the same time by the same contractors from the same materials, such as large, expensive windows that took a crane to hoist to the second floor and specialized training and tools to install. “Todd and a few buddies busted ’em out over a few weekends with a few six-packs. We needed ’em to see Russia.”

Republican commentators expressed their untrammeled joy at and admiration of Mrs Palin’s brilliant move, noting its similarity to the bit where Vader kills Gandalf and he then comes back to kill Voldemort. “The Palins are just staying in Paraguay for a few short months,” said Bill Kristol on Fox News, “until the financial mudslinging stops. Then she’ll be back to run for President! A resounding shot of hope has been fired!” Up to several protestors took to the streets in urban areas with signs saying “STOP WASHINGTON,” “STOP OBAMA” and “SAVE SARAH” before being returned to the Republican Preservation National Parks in Utah and Alaska.

Mrs Palin’s last words were for the mainstream liberal media. “As I leave you, I want you to know — just think how much you’re gonna be missing. You won’t have Palin to kick around any more. Because, gentlemen, this is my last press conference and it’ll be one in which I’ve welcomed the opportunity to test wits with you. You betcha!”