STAPLES CENTER, Wasilla, Tuesday (NNN) — Sarah Palin has revealed what compelled her to quit as governor of Alaska at no notice: the media weirdness deficit with Michael Jackson gone. 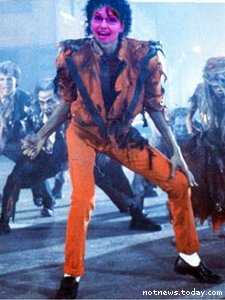 “When the going gets tough,” said Mrs Palin in an impromptu speech this afternoon, “the winners get quitting! Life is about choices! It’s time to bring Alaiskah’s huge weird surplus to outside, to build up and fight for our country! We are not retreating, we are advancing! Into the fourth dimension!”

“The tension in her face during the resignation speech,” noted Bill Kristol of Fox News, “like a teenager trying to tell a pre-emptive whopper of a lie to her parents before they find out what she’s actually done — it was her angst and upset at the death of the King of Pop. A pain that all Americans share, as they do memorial moonwalks and sell tickets to the memorial at inflated prices on eBay in the finest American can-do free enterprise spirit.”

Mrs Palin flew herself down to Los Angeles for the Jackson memorial concert, flinging herself onto the golden casket as it came up on stage with a spectacular series of dance moves, culminating in shooting the head off a zombie moose.

BBC News respectfully played the entirety of the memorial concert, which was much more newsworthy than Uighurs rioting in Xinjiang Province in China or anything. “It’s not like they could even get more interest on Twitter than Jackson,” said on-the-spot reporter Matthew Price. “Get with the programme, Uighurs!”