CRYSTAL CAULDRON, Surrey, Monday (NotScientist) — In a revolution for the forces of allopathic hatred and the negation of human spiritual potential, a strike force of rogue sceptics has, using the funding of their pharmaceutical death-dealer masters, negated homeopathy with the proving of a new remedy: homeopathic homeopathy. 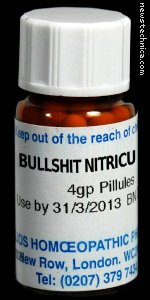 The preparation was initially energised using the explanations for Plutonium Nitricu 30C (homeopathic plutonium), Positronium 30C (homeopathic antimatter) and Rational Sceptic 10C (homeopathic exploded brains of people hearing of the previous two). The succussions of the subsequent dilutions were done using a mechanical potentiser based on the arm of Dr Samuel Hahnemann, the discoverer of homeopathy, which pounds the mechanical arm against a firm rubber pad from a height of five inches twenty times in two seconds. This is also effective when applied to the patient just before presenting the bill.

The provers found they experienced the complete sensations of every ingredient that had not been added to the solution as, like all homeopathic solutions, it was guaranteed to contain no ingredients whatsoever. This gave them complete understanding of all possible effects of nothing but pure distilled water energised only by a £5.99 price tag from Boots on the bottle. They then proceeded to get new jobs doing something actually useful for a living.

Ravenwoo Granola (Bachelor of Homeopathic Medicine, University of Bums on Seats) countered that hundreds of years of carefully documented study of homeopathy could not be at error. “I dosed myself with a homeopathic preparation from my own anus before considering your question, thus assuring my brilliance and perspicacity on this subject.”