A344, Gateway To The West, Sunday (NNN) — Thirty-six thousand revellers, hippies, wiccans and general space cadets have gathered at Stonehenge for the summer solstice, throwing astronomical megalith calculations into chaos. 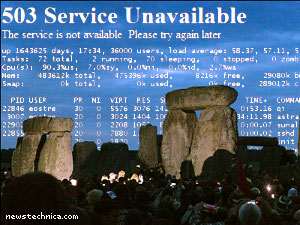 Wiltshire riot police, fresh from the hugely successful G20 operation, kept the fuzzy-brained masses at bay with horses, drug sniffer dogs, an unmanned flying drone and a battalion of level thirty-one family tradition Dawkinsian sceptics, admitting only essential maintenance druids into the fence around Stonehenge itself to handle the load on the ley lines powered by the henge.

As the druids began their incantations, Wiccan priestesses drew their cowls tight against the damp morning air and half-naked dancers waved their hands in the air and went: “Woo, woo, woo.” “Lookit the fiminine energies on that one!” said Travaglia.

Restrictions were placed on the amount of alcohol revellers could bring in and police said they would not tolerate illegal drug taking or unlawful raves. However, it turned out the most apparently off-their-heads were just like that normally.