THE WHITE HOUSE, Tehran, Sunday (NNN) — Controversy reigns after the Iranian election on Saturday, in which incumbent President Mahmoud Ahmadinejad was re-elected with a landslide 63% of the vote and returns from all districts precisely matched Government pre-poll predictions. 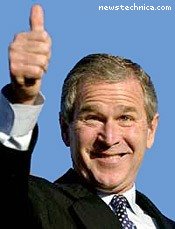 Mr Ahmadinejad credits his win to democratic methods perfected by George W. Bush. “We fully understand the international community’s desires to see that Iran’s democracy transparently works to the highest standards found in other nations. Mr Bush’s work has been exemplary.”

The “hanging chad” technique has been particularly effective. “Rounding up opposition voters, politicians and journalists named Chad and hanging them. In those cases where the opposition insurgent was not named Chad, we of course took care to change their names to Chad posthumously. Democratic procedures must not only be observed, they must be seen to be observed.”

“I stand one hundred per cent behind my brother Mahmoud,” said Supreme Leader Ali Khameini Rove of the Project for a New Iranian Century. “Occasionally with his mouth moving in time with the movements of my hand. Clever, isn’t it?”

Mr Ahmadinejad has been condemned by some as a “lunatic redneck” and “a gibbering madman perilously close to the nuclear button.” “These charges are most unfair. When I declaimed the necessity of obliterating and deleting the unnameable Zionist entity with cleansing atomic fire, it was implicit in these statements that we would need to reach a resolution to undertake such action through proper procedures of international diplomacy. Mr Bush’s excellent work in decapitating Saddam Hussein’s odious regime shows the way forward in this regard.”

“We stand in solidarity with the Iranian people,” said President-in-Exile Al Gore from his cave high in the mountains of Afghanistan. “For my own part, I will never give up the fight to take back America and Iran from the Republican counterrevolutionaries and will not rest until all Americans and Iranians breathe the free air of socialism … what? Democrats elected? Huh, next you’ll try telling me the President’s black. You can’t fool me! Back where you came from!”