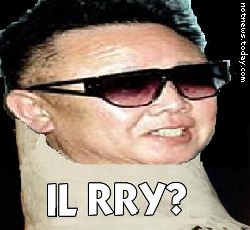 “The appointment of a successor is totally my father’s decision. Jong-un is certainly the man for the job. Chip off the old block, he is. Who wouldn’t want to inherit somewhere in as good shape as North Korea? Fantastic past, fantastic present, fantastic future. Who wouldn’t choose military parades and announcing a 30% increase in mud pie production over drinking, whoring and gambling? I’m sure there’ll be no war crimes trials for the lucky fellow in the hot seat when the hollow shell collapses. Because it won’t, of course. And isn’t hollow. We just feel the rest of the world isn’t ready to share the bountiful socialist wealth flowing from our policy of Juche. Of course!”

Kim Jong-nam denied reports he had defected or was living in exile. “Macau and China are great places. Not as great as North Korea, of course! No, no. I just like it here.”

There has been much speculation over who would follow Mr Kim, who is thought to have suffered a stroke last year. North Korean officials were reportedly told to support Kim Jong-un after the North’s 25 May nuclear test. “Certainly I haven’t heard of any purges or midnight executions of perceived supporters of mine. Because I’m not seeking any. Or the job. No, no, Jong-un’s your fellow. Fabulous bloke. ’Scuse me, just got to look up departure times for planes to Xinjiang Province, or perhaps deepest Siberia. Lovely to catch you, must do lunch, love ya babe!”