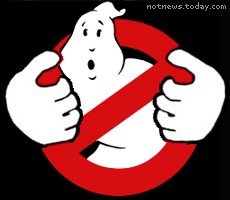 “All the original cast have signed back up,” said Aykroyd. “Sigourney Weaver, Harold Ramis, Annie Potts, Ernie Hudson and of course Bill Murray. … When I say signed up, I don’t mean on paper, in any committed sense. But, you know. They’ve ‘signed up,'” he said, making air quotes.

“Bill was a little reluctant. Something about ‘rather drink crossed streams of my own piss.’ But a few dumptrucks full of cash backed up to his house should see him fully committed. Hopefully.”

Murray, who owns a controlling interest in the franchise, has thrown out Aykroyd’s original script, insisting one by Charlie Kaufman be used instead, in which failed parapsychologists in their sixties chase emotion-absorbing slime controlled by the Sumerian god of destruction through the existential caverns of their own minds as they attempt to reconstruct their lives and careers. And fail. “It’ll be laugh-a-minute,” said Murray. “I sure will be, anyway.”

“This is the best and most original idea in Hollywood this year,” said Aykroyd. “It’ll leave Blues Brothers 2000 in the dust.”