MEMBERS’ BAR, Westminster, Wednesday (NNN) — The House of Lords has suspended two Labour peers, Lord Truscott and Lord Taylor of Blackburn, for being stupid enough to get caught offering to influence legislation for money. 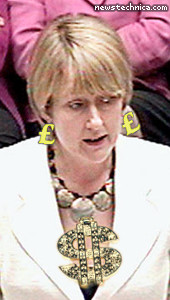 Two other Labour peers, Lord Snape and Lord Moonie, were cleared of similar allegations, but apologised to the Lords for “almost getting caught.” (Lords Potter and Sirius were not available for comment.)

“The trust that people place in parliament and parliamentarians has sunk like a stone,” thundered Lord Archer. “It does serious damage to the reputation of the house,” added Lord Black from his American residence. “It has meant being shouted at in the street, our spouses being reluctant to go to our local communities because of what people have been saying,” said Lord Lucan, speaking from Goa in India.

The last member of the upper house to be suspended was Thomas Savile, 1st Earl of Sussex, who was also barred in 1642 for siding with Gordon Brown.

“I am being made a scapegoat,” said Lord Truscott. “There are other peers far more stupid than me. Than I. Infamy, infamy! They’ve all got it in for me!”

One thought on “Two Lords suspended for getting caught”