REHABILITATION PROJECT FORCE, Hemet Gold Base, Friday (NNN) — Ten of America’s largest 19 banks have failed the stringent economic “stress tests” based on the teachings of Dianetics. 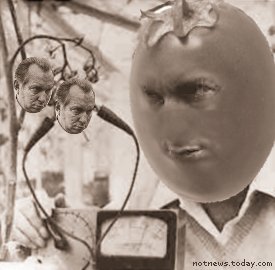 Senior investigators from the Office of the Treasury (“Big OTs”) found that, considered as thetans, the banks were too weighed down with engrams, from this and past lives, and the engrams of the many “sub-prime thetans” still attached to them.

The test involves financial executives holding the “cans” in a firm grip while answering questions such as:

2. When others are getting rattled, do you remain fairly composed?
8. Are your actions considered unpredictable by other people?
23. Do you resent the efforts of others to tell you what to do?
24. Is it normally hard for you to “own up and take the blame”?
30. Do you enjoy telling people the latest scandal about your associates?
59. Do you consider the modern prisons without bars system “doomed to failure”?
76. Do you sometimes give away articles which strictly speaking do not belong to you?
124. Do you often make tactless blunders?
125. Are you suspicious of people who ask to borrow money from you?

“The economy’s been like a volcano that’s about to blow,” said US Treasury Secretary Timothy Geithner. “Our hope is that banks can get back to the business of banking, staying upstat and producing Valuable Final Product, to lift the cloud of uncertainty.”

Analysts broadly welcomed the results of the stress tests. “The IQ test seems to have been very accurate,” said Eric Kuby of North Star Investment Management. “The fears of entheta and the influence of suppressive persons have more or less disappeared.”

The current Federal Reserve system was set up in the 1950s as the result of a bet between Alan Greenspan and L. Ron Hubbard.