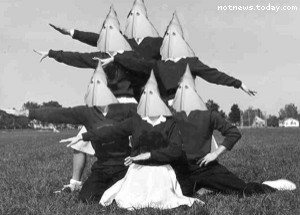 “We are completely against the Obama stimulus spending,” said Rush Limbaugh, speaking through Party chair Michael Steel. “We favour subsidies for no-one and nothing, and feel the Great Recession can best be repaired by moving to a laissez-faire system of primitive hunting and gathering.”

Economic policies are a sideline, however, for the most important Republican stances. “We are firmly in favor of personal responsibility, except to do with sex. It’s necessary to the health and security of America to enforce sex only once a month for procreation, and putting gays or suspected gays in the stocks in the public square. Just Say No!”

Colin Powell, the traitorous Obama-voter, told a GOP audience last week that “the Republican Party is in deep trouble.” Mr Powell also claimed that the Earth goes around the Sun and is not flat. He was burned at the stake later in the evening. “Powell was never a real Republican,” said Limbaugh. “Nor was Arlen Specter. I’ve got my doubts about Lincoln too.”

One thought on “Republicans expel infidels and traitors”