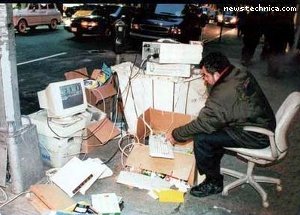 “Any change will negatively impact well designed architectures for the sole benefit of this embedded crap,” said Drepper. “Famously good architectures like x86. Can you believe, these people wanted their C library to work in systems with shells other than bash! They must think they’re signing my paycheck.”

Drepper has, in retaliation, announced his own fork of Debian. It will be created in cooperation with Joerg Schilling and Tuomo Valkonen and be based on the Schilix variant of OpenSolaris, with Ion running on XFree86 as the standard graphical interface. “Keith Packard ruined X,” said Valkonen. “Also, time is actually cubical in nature.” The standard file system will be ext4, given its proven ability to cause data loss in user software that ext4’s maintainers consider ill-written. “Hans Reiser didn’t get back to us. Pity, we always got along with him really well.”

The project will apparently be licensed under both the intersection and union, and probably various algebraic transformations, of the GPL, LGPL, CDDL, MIT License and the thing Valkonen wrote for Ion3. This is not anticipated to be a problem in practice with real-life users, at least not until one exists.

“YOU!” said David Dawes of XFree86. “YOU’VE BEEN TALKING TO THEM, HAVEN’T YOU! YOU’RE CONSPIRING WITH THEM! THOSE GUYS! THEY STOLE IT ALL! THEY PUT A RADIO IN MY HEAD! LINUX/BSD WEENIES! EDUCATED EVIL AND STUPID! I’LL SHOW ’EM! HELL YES! I’LL SHOW ’EM ALL!” “That means he’s onside with us,” said Valkonen. “Dave’s been a bit terse since he finally lost it trying to fix a broken modeline.”