Some might say that Mathematica, the source of my fortune, and A New Kind Of Science: A Brief History Of My Stupendous Intellect were ambitious projects. But in recent years I’ve been hard at work on a still more ambitious project: Wolfram Alpha. 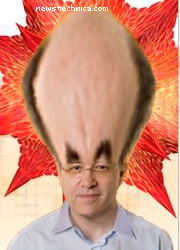 Fifty years ago, people assumed that computers would quickly be able to handle all kinds of question. It didn’t work out that way. But a few years ago, I realized that I was finally in a position to do it myself. As I’d always expected I’d have to, of course.

I had the crucial ingredients: Mathematica and A New Kind Of Science. And my truly massive intellect. With these, I had a language to compute anything and a paradigm for complexity from simple rules. And my spectacular brain, which is much more spectacular than anyone else’s, as proven by me being rich as well as smart. Which is smarter: to be a professor, or to be the professor all the other professors pay tribute to? I think my net worth makes the answer clear.

But what about all the actual knowledge that we as humans have accumulated? I realized we needed to make all data computable as knowledge. Of course, natural language is incredibly difficult for computers. So we added the secret ingredient: my jaw-droppingly spectacular brain, undoubtedly the largest on Earth.

I’m happy to say that with a mixture of clever algorithms and heuristics, linguistic discovery and curation, and some casual Nobel-worthy theoretical breakthroughs in my spare moments, we’ve made it work. It’s going to be a website with one simple input field that gives direct access to my superlative brain, in its planet-sized glory.

2 thoughts on “Wolfram Alpha: A new kind of search engine”