LONGHORN RANCH, Glue Factory, Monday (NNGadget) — With the release of Windows 7 set for October 23rd, Microsoft marketing marketer Richard Francis has said computer manufacturers may not be able to ship Vista once Windows 7 is available. 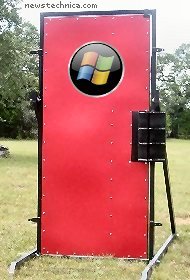 Outrage at the news was rapid. Microsoft quickly backtracked, claiming Vista would remain available until at least 2011 (“we kept 98 support up for 18 months when XP was out”), but customers were not mollified by promises that Windows 7 buyers would be allowed to downgrade (“we call it an upgrade”) to Vista.

A “Save Vista” campaign has been organised by InfoWorld. “We detected a deep anxiety over Vista among technologists and consumers alike,” said editor Galen Gruman. “We decided to do something about it, launching a petition drive to ask Microsoft to keep selling Vista after the planned October 23 end-of-sales date.” The petition has already gathered over ten signatures. “‘Seven’ is just sucking up to latté sippers. Like Hummer, like Chrysler, like Edsel, Vista is a great American name that shows the might of full-sized American industrial production. It’s a monument to everything that makes us the country we are.”

“My computer business employs 200 people,” said M. Shuttleworth of London. “The best possible thing for it is to make sure Vista continues and goes forward.”

“And how about extended support for Microsoft’s third-greatest success ever, Microsoft Bob? By the wife of the founder, no less! I think we should be told.”