BOLGIA 10, Redmond, Thursday (NNN) — In a stunning public relations coup, Microsoft Corporation (NASDAQ: MNPLY) has successfully overshadowed today’s release of Ubuntu Linux 9.04 “Jaunty Jubblies” by announcing its failed financials for a fourth quarter in a row and laying even more people off.

Microsoft announced new and expanded roles for remaining key executives as another several lesser, losing quitters deserted upper management. “It shows the fantastic opportunity available to everyone at Microsoft to climb seven or eight reporting levels up the org chart,” said marketing marketer Steve Ballmer to pitchfork-wielding Wall Street analysts today. “If we haven’t laid them off for making too much money or not kissing enough ass.” 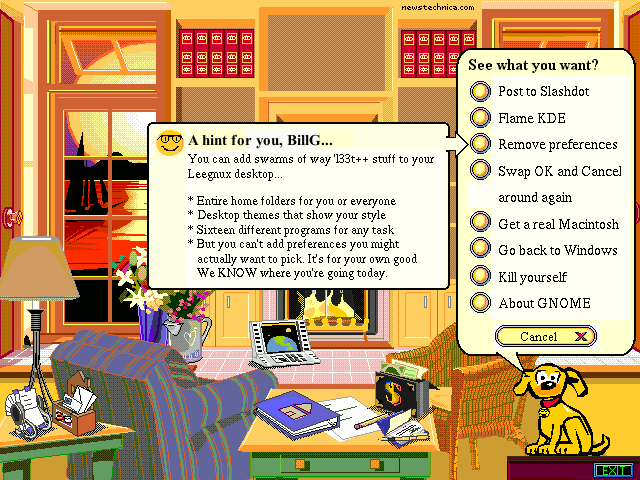 The Yahoo! deal is expected to go ahead. “We figure they’ll go broke before we do. Probably.” Mr Ballmer also plans to run the Yahoo! servers on Windows NT rather than FreeBSD after a similar change worked so well at Hotmail. “Some say synergy’s another word for two plus two equals one, but you just have to make the value of one work for you.”

Windows 7 betas have been greeted with remarkable positive press. “Of course, the betas preview the ‘champagne and hookers’ edition, which would be way too much for netbooks and explode users’ brains. Imagine thinking those little things are computers! So we’re releasing what we call Windows 7 Dumbass Edition™. It lets you log in and look at the shiny. Even Spider Solitaire has the ribbon toolbar! And you can buy an upgrade to the version that runs programs! It lets you do that!”

Dumbass Edition™ comes with pre-installed viruses to make the computer part of the Storm, Conficker and FBI botnets. “If you can’t beat ’em, join ’em.”

However, Microsoft has indicated to its press corps, Microsoft Completely Enderlependent Analysts, to ixnay on the evensay and highlight the job openings for work on Windows 8, firmly penciled in for a 2012 release. Windows 8 will be optimised for low-end 32-core systems with a mere 16 gigabytes of memory — 28 cores for the interface, 3 cores for the DRM and one core for everything else. “Seven is just so this year. I hear they’ll get $DATABASE_FILESYSTEM done next release for sure!” said ZDNet marketing marketer Mary-Jo Enderle. “It’ll be awesome™!”

“I’m sure it’ll be fine, fine,” said Bill Gates, upping his hours at his charitable foundation and scheduling the sale of several more packages of Microsoft stock.