TWATTER, Arsebook, Tuesday (NotScientist) — A direct neural interface to post on Twitter has been created by Adam Wilson of the University of Wisconsin-Madison. 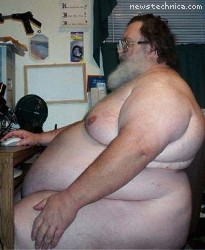 “We originally hooked it to the brain,” said Wilson, “but only a very limited selection of messages came out, that appeared to be coming from somewhere else. So we’ve just gone directly to the penis without the middleman.”

Male humans suffer from having functional bodies trapped with almost completely paralysed minds. The penis is an organ used by male humans primarily for thinking and making important decisions. It is also used as an outlet for unwanted poisonous bodily excreta, such as sperm.

The messages — or “twats” — cover the full gamut of human experience and emotion in 140 characters, from “ANOTHER PINT WHAT AN EXCELLENT IDEA” to “DYING FOR A SLASH” to “GDAY LUV NICE TITS” to “WOOHOO GOT A GOER HERE” to “WOKE UP DEAD PIG SHAT IN SKULL OH DEAR GOD WTF IS THAT MUST CHEW ARM OFF.”

“The next stage is a feedback loop for at-replies,” said Wilson. “We’re hoping to create the dream of every Internet user: a response system that will send five hundred volts through someone’s nether regions when they say something unbelievably stupid.”