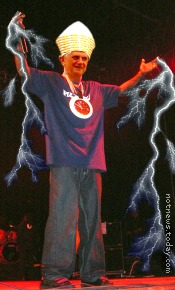 “Now is the time to strike,” said Cardinal Giovanni Lajolo, governor of Vatican City. “The financial crisis has unleashed huge and renewable sources of guilt, which in the long run will reap incomparable rewards for the Church.”

Italy has a binding target for renewable energy consumption of 17 percent. The Vatican will export energy to Italy, powered by raw guilt from the largely Catholic populace. “So far it’s proven indefinitely renewable.”

Pope Benedict XVI has been outspoken on environmental issues. “The destruction of the environment, its improper or selfish use and the violent hoarding of the Earth’s resources cause grievances, conflicts and wars, precisely because they are the consequences of an inhumane concept of development. You should FEEL BAD about that. And give us money.”

The plant will be topped up at night by Dante-esque treadmills walked by priests sent back for kiddy-fiddling. “We feel terrible, terrible,” said Fr O’Pederast. “I mean, we got caught.”