GRUB STREET RETIREMENT VILLAGE, Times Old Roman, back when this were all fields (Mediocre Grauniad) — The Guardian Media Group has asked the Government to examine Google News and other content aggregators, claiming they contribute insufficiently to their income. 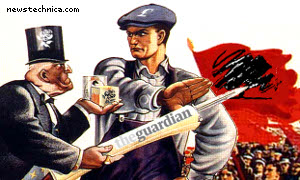 “We need the Government to bring back balance, ‘balance’ defined as being able to make them give us money because we want it. You’d think the Internet wasn’t invented to give newspapers and record companies free money!”

The newspaper group argues that traffic from search engines doesn’t make up the cost of producing the content. “Ad revenue has collapsed, so search engine traffic doesn’t bring in enough views to pay for itself. Our inability to sell ads is clearly Google’s problem.”

The Guardian suggests the exploration of new models that “require fair acknowledgement of the value that our content creates, both on our own site through advertising and ‘at the edges’ in the world of search and aggregation. Basically, they should just give us money because we want it. And the music industry too. How about a bailout? Go on, gi’s it.”