ONE MICROSOFT LOOP, Homeless Island, Monday (NNN) — As Microsoft’s search engine share sunk to its lowest level yet in February, with approximately 8 to 9 queries total worldwide, Steve Ballmer has reiterated his willingness to hook up with Yahoo! and its 21 queries worldwide. 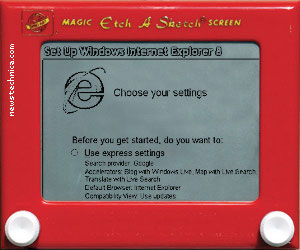 The press conference was held on a street corner in San Francisco as Mr Ballmer and Jerry Yang sat with their hats on the sidewalk and playing harmonicas with a “WILL WEBSEARCH FOR FOOD” sign behind them.

“Understandably, we expect less activity in the Great Recession,” said Mr Ballmer. “Nobody knows what value assets should be … say, you aren’t finished with that cigarette, are you?”

Press attendees included a schizophrenic local resident in a tinfoil hat (“to keep Google out”), two teenagers drunk on malt liquor and a policeman keeping an eye on things from a distance. The teenagers taunted, confused and upset Mr Ballmer by suggesting he attempt to locate his own posterior.

“My new search technology is unstoppable! Just look at this netbook!” shouted Mr Ballmer, waving an Etch-a-Sketch in a threatening manner. “IT’S MAUVE! IT RUNS WINDOWS SEVEN! LINUX PUT A RADIO IN MY HEAD! I’LL SHOW ’EM ALL! BASTARDS!”

“Some love stories are eternal,” said Mr Yang. “Romeo and Juliet. Heloise and Abelard. Leopold and Loeb. Microsoft and Yahoo.”