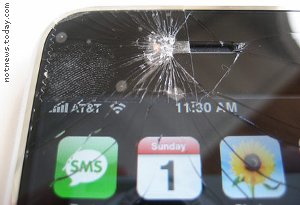 People will use the touchscreen computer “the same way they have interacted with everyday items their entire lives,” said Philippa Snare of Microsoft UK, “with hands and with gestures.” Instead of a keyboard or mouse, the techno-table uses a 30-inch touch-sensitive screen that also reacts to objects placed on it. Photos are automatically downloaded from cameras or phones. A spilt cup of coffee causes the “I’m a PC” guy to appear on the screen and start shouting at you for ruining his shirt, and your fourth Big Mac of the day causes him to keel over with a heart attack and the system to blue-screen. Users then make an appropriate gesture.

Unlike conventional computers which only one person can use at a time, Surface is a “multi-touch” system allowing several people can use the screen at the same time. Stealing someone’s data is as simple as sliding your phone onto the screen. “We’ve made it completely compatible with popular gadgets such as Windows Mobile and Zune.”

Surface will appear in communal areas such as shops, hotels and pubs first, allowing the public to get used to the new technology and see how it responds to pints being poured over it and kebabs in the coin slot.

Surface is part of Microsoft’s vision of the Digital Home. “Imagine your television, your refrigerator, your gas boiler running Windows Vista — I mean, Windows 7. What could possibly go wrong?”

One thought on “Microsoft launches furniture that crashes”