THE SPRAWL, Gernsback Continuum, Thursday (NNN) — The Government has approved plans to build another six runways and three terminals at the renamed Mega-Heathrow air city.

The new runways will be built as part of the process of paving the entire area inside the M25, with designated urban planning “grey belts.” 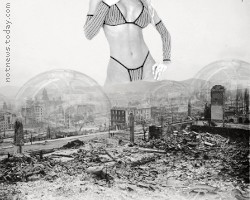 The plans are considered essential to maintaining London’s economic well-being. The city will be enclosed in a series of large perspex bubbles, with people travelling over the flooded streets in advanced scientific hoverchairs. Official Thames crash zones for Airbus A320s will be built around the Embankment. “We are taking care to preserve our architectural heritage,” said Transport Secretary Geoff Hoon. “Rest assured, the Gherkin will be there forever.”

“The new runways are environmentally unacceptable,” said Ravenwoo Granola of the Fluffy Nice People Smashing Things Alliance. “People should learn to walk to New York instead.”

The village of Little Boring will be demolished. “I’ve lived my entire life here,” said Brenda Busybody, 77 (IQ). “It’s the destruction of a community. We might have to marry people we’re not related to!” After demolition the site will be salted by a volunteer workgroup of people who left the village as teenagers after being ostracised for having been born with ten fingers.

“I hope it’ll help global warming,” said Luscious Lucy, 19, of Sheppey, in her editorial column on page 3 of The Sun. “I can wear a bikini all year round. Or not. Fnarr!” The fashion page shows pinstripe bikinis and Speedos for office workers.

Mayor of London Boris Johnson is firmly against the plan. “Paving areas where the nice middle-class people who voted for me live is unacceptable. Instead, we should build Boris’s Super Whizzo Thunderbirds Airport Fortress in the Thames estuary. And pave Sheppey.” Luscious Lucy concurred this was probably for the best.