NO HEAVEN, Cold Harsh Reality, Tuesday (NNN) — The Bus Atheist campaign launched today, with over 800 atheists to carry signs saying “There’s probably no bus” in locations all over the country. 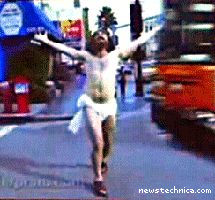 The campaign was started as a “positive” response to the London Transport signs all over the city claiming to be places where buses would appear, some claiming they even did so at predictable intervals.

“This is despite a complete lack of evidence for any such phenomenon,” said Professor Richard Dawkins, “nor any explanation why such a thing would occur. Our rational slogan will hopefully reassure anyone who has been scared by this kind of evangelism. Must dash, I have a Catholic priest out back to bugger with a hot poker.”

The campaign has come in for criticism. “They should give the money to those in need of it,” said the Church, “like us, for instance. Hardly any cash over here. The Monarchy could do with some too. Dig deep!”

The £135,000 raised for the campaign will be directed to the needy and deprived: West End adland execs feeling the brunt of the recession. “Spare a fiver for a line? Please give so they may grow.”

“You wait ages for an atheist, then eight hundred come along at once. Boris has made a hash of it yet again,” said Ken Livingstone, though no-one asked.

One thought on “There’s probably no bus. Now stop worrying and enjoy your walk.”