MICROSOFT WOTCH, Cupertino, Monday (NNGadget) — Apple chief executive Steve Jobs, 53, announced Monday he was being treated for a “hormone imbalance” but would remain head of the company. 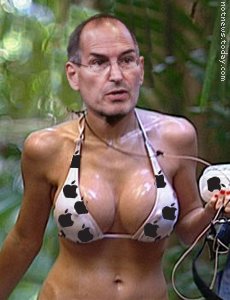 “I find myself unable to give the Macworld keynote tomorrow,” said Jobs, “but my truly spectacular rack will be well worth the hormonal rages. It’s like six months of PMS, though my engineers will tell you there’s hardly a difference.”

The keynote, to be presented by Pamela Anderson and Jenna Jameson, is rumored to introduce the new iKini and iFront lingerie range, in signature translucent white, with eight gigabytes of music storage and 3G phone connectivity. “Left one for signal strength, right one for network.”

Jobs noted that his decision not to give the Macworld keynote had set off a “flurry of rumors about my health, with some even publishing stories of me on my deathbed.” To restore investor confidence, he has been fitted with a full set of cybernetic implants providing full live data on his bodily functions, broadcast in sideband data on the Disney Channel and downloadable daily on iTunes.