TELEWEST, Los Angeles, Friday (NNN) — Virgin Media (“Let me tell you what ‘Like a Virgin’ is about. It’s all about a girl who digs a guy with a big Dick. The entire song. It’s a metaphor for big Dicks.”) has hired Jules Winnfield of the Marcellus Wallace Organization to promote its super-fast 50Mb broadband service. 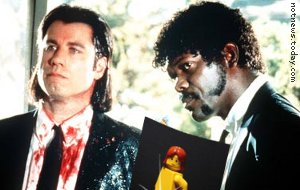 In the advertisement, Jules Winnfield and Sir Richard Branson go to Virgin Media customer service to recover a briefcase belonging to their boss. After screaming “Technical, melonfarmer! Do you speak it?” they kill every internet site accessible from the service except Wikipedia. While driving the download back to Mr Wallace, they accidentally shoot Wikipedia in the face. Now they’re picking bits of their servers out of the upholstery. “When you came pulling in here,” says Quentin Tarantino, “did you notice a sign out in front of my house that said Dead NTL Storage?”

The ad ends with a stirring speech from Winnfield:

The path of the righteous browser is beset on all sides by the inequities of the selfish and the tyranny of evil men. Blessed is the IWF who in the name of the RIAA and goodwill shepherds the marks through the valley of darkness, for they are truly their brother’s keepers and the finders of lost downloads. And I will strike down upon thee with great vengeance and furious anger those who attempt to poison and destroy My brothers. And you will know My name is the Lord when I pop a download cap in their—

At this point the screen goes blue and the set-top box locks up.